I was catching up on The Pioneer Woman on the Food Network the other day and she shared this amazing recipe for roasted red pepper pasta. I filed it away and knew I wanted to make it soon. Today, we're celebrating Bev…she's pregnant with twins. I'm so excited for her! I met Bev a few years ago and we got to hang out… 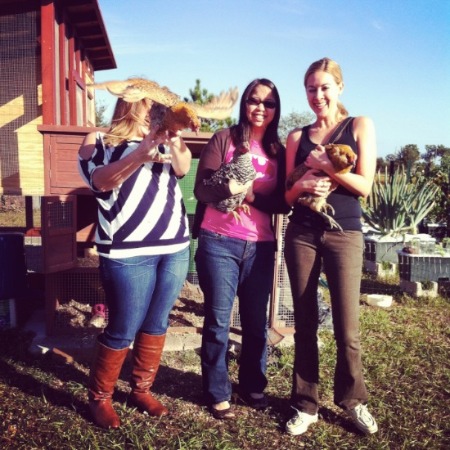 with our mutual friend, Jaden, and it was a blast…as you can see above. We made egg rolls together and I found out she likes to sing. She's a beautiful singer!

Everyone who knows Bev would describe her as hilarious…beyond hilarious…you should check out her instagrams. She is the cutest. cutest. cutest. pregnant with twins person I have ever known. She doesn't even look like she's pregnant except for the bowling ball she's carrying around. Seriously…I don't think I could be half as cute as her if I ever get pregnant! And who calls herself knocked up when she's pregnant and married? Bev, that's who. I'm trying to see if she will let me move into her nursery. It's the cutest thing ever…I know she's going be such a great mother! 🙂 One more thing…I just die. Hilarious.

When Aggie and Lisa I chatted about doing something to help Bev feel special…to shower her online, I wanted to make an appetizer. Because I'm obsessed with quick & easy appetizers. But then I realized I should make this pasta dish to help celebrate because I know she loves Ree as much as I do! I changed it a tad bit by adding goat cheese near the end instead of heavy cream. I honestly don't know why it's taken me so long to try a roasted red pepper sauce with pasta. I love fried roasted red peppers and roasted red pepper salsa so why not with pasta. It's so good!

Cook the onions and garlic in butter and then add the roasted red peppers.

Puree it in a food processor or blender (that you know can process hot foods) and then return it to the skillet.

After adding more butter, the vegetable broth, salt and pepper, add the goat cheese and stir.

I know Bev would like this recipe because she loves pasta and of course goat cheese! It's so easy to make. This is going on my list of favorite lunch recipes!

Lisa, Aggie and I gathered a few of Bev's friends to help her celebrate. Visit the links below and check out the amazing recipes these lovelies are sharing!

Appetizers
Bacon Cotija Guacamole from Gaby of What’s Gaby Cooking
Gruyère Gougères from Shaina of Food for My Family
Lemon Risotto Tarts from Kelly of Live Love Pasta
Goat Cheese Crostini with Pesto and Roasted Red Peppers from Liz of The Lemon Bowl
Spinach and Feta Quinoa Bites from Aggie of Aggie's Kitchen
Roasted Red Grape, Brie and Rosemary Flatbread from Laurie of Simply Scratch
The Fastest Appetizer Ever from Brooke of Cheeky Kitchen
Apple Pear Tart – Two Ways from Sarah of Daisy at Home

Slightly modified from The Pioneer Woman
Did you make my Roasted Red Pepper Pasta with Goat Cheese Recipe?I want to see! Upload an image below with your rating and comments, share on Instagram and tag @TheLittleKitchn, and be sure to use the hashtag #thelittlekitchenrecipes.