We love this spicy chicken soup recipe so much. I have made it so many times and it's a copycat version of Carrabba's chicken noodle soup. 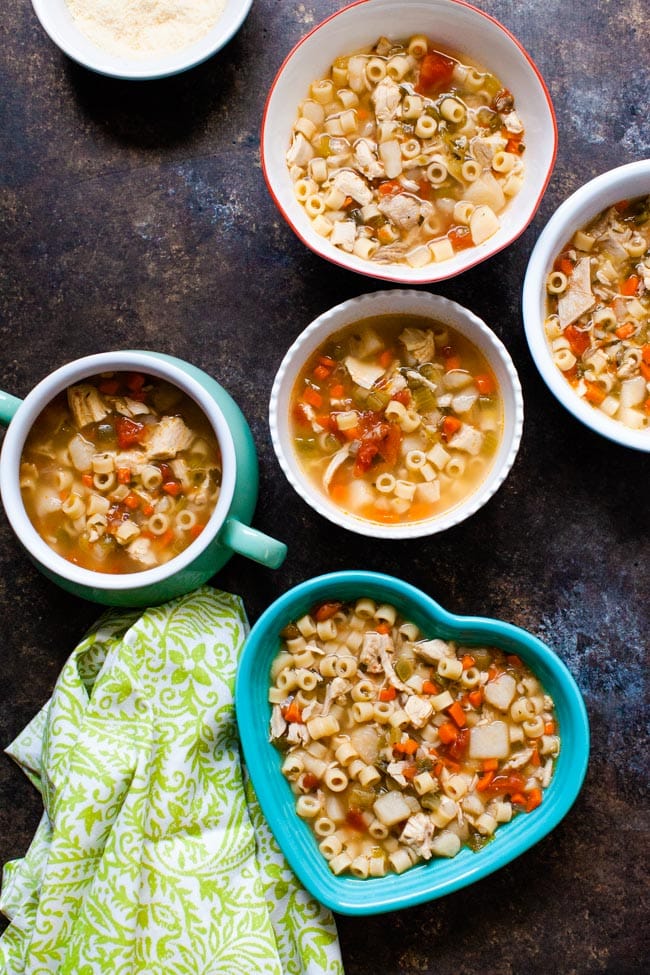 This recipe for spicy chicken soup is one of my favorite chicken noodle soup recipes. I need to be honest and admit to you that it takes a little bit of time to prep because there are so many vegetables in it but it's well worth it.

This spicy chicken noodle soup brings back so many memories! First of all, I love ordering Mama Mandola’s Sicilian chicken soup at Carrabba's Italian Grill.

I have made this Carrabba's chicken soup recipe for years. I have a funny story about it below. But I did stop making it for a few years.

Last December, something reminded me about this recipe so I made it again. I ended up eating it for days after we had to put our beloved dog, Charley, to sleep. I can't even tell you how much it brought me comfort.

I didn't have to cook dinner, I would just defrost the container from the freezer and just eat it. It had starch, protein and vegetables and while I was in the thickest part of my grieving, I was well nourished. 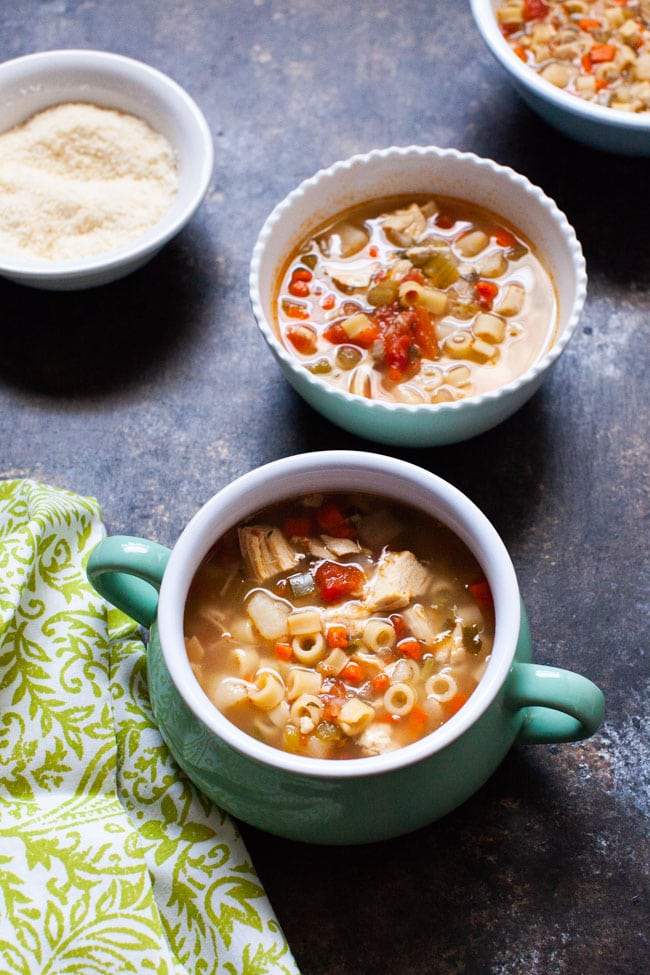 Years ago, when I made this chicken noodle soup for dinner, Curtis, my husband, refused to eat it. I probably shouldn't even tell you this story but we laugh about it now. After I finished making it, I put a lot of it away in the refrigerator and left just enough for the both of us to eat in the soup pot.

If you see other recipes online for this Sicilian chicken soup, they will tell you to cook the soup with the whole chicken in the pot for two hours+. The whole chicken falls apart and that's exactly what happened. Curtis went to make himself a bowl for dinner and in the ladle was a neck bone.

He freaked out and said, I'm not eating this! I was so upset, I had worked so hard on making this dinner. I packed it all up and brought all of the soup into work the next day. Everyone LOVED this chicken noodle soup.

One of my co-workers asked, “can Curtis refuse to eat more of your food so we can get more of your cooking, Julie?” LOL Take it from 18 of my former co-workers, this Sicilian chicken soup tastes good!

By the way, I'll show you how to make this spicy chicken noodle soup and you don't have to cook the entire soup for 2+ hours. 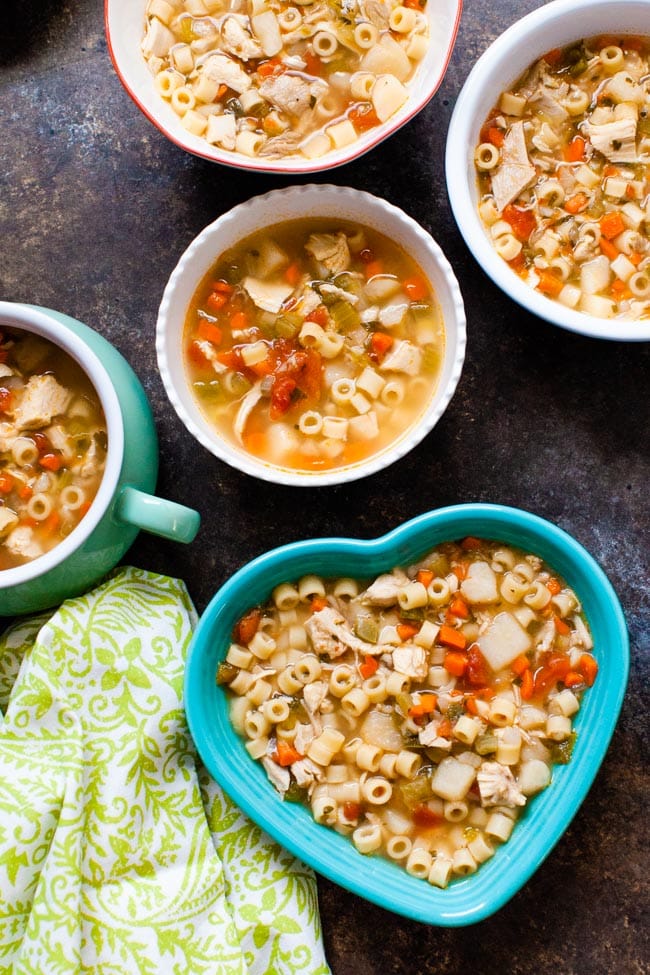 Why chicken noodle soup is the best

How chicken soup is made

Chicken noodle soup is usually made with a whole chicken. Most chicken soup recipes use a whole chicken and a few different vegetables. You'll want to add the chicken and vegetables to a large soup pot with water. Bring the soup to a boil and then lower the heat to a simmer. I let it simmer for 1.5 hours.

Can chicken soup be frozen?

Yes, I freeze the leftovers and when I'm craving some comfort food like chicken noodle soup, I defrost it in the microwave and then heat it up, add Parmesan cheese on top and enjoy!

When I freeze soup, I put one or two portions in each container so I only defrost what I need. Be sure to put the name of the recipe and the date (with the year!) on a label on all of your containers so you can easily identify each container. It usually keeps just fine in the freezer for a few months! 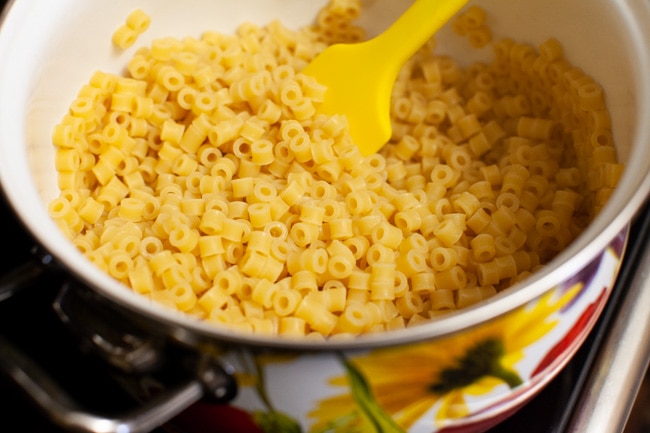 Which pasta for chicken soup?

You can use any pasta you like for chicken soup! I love curly egg noodles and even bow ties. For this spicy chicken soup recipe, I love to use the small tube shaped pasta also known as ditalini pasta.

How to make spicy chicken soup at home

First, you do some prep work cutting up vegetables. The vegetables are:  onion, celery, carrots, bell peppers and potatoes. Take the whole chicken and remove the giblets. Add the chicken, vegetables and water to a soup pot. Bring the pot to a boil and then skim the foam from the soup. I use a spoon to do that.

Add the parsley, garlic, salt, pepper and crushed red pepper to the soup. Then, reduce the heat and simmer for 1.5 hours. You'll want to remove the whole chicken from the spicy chicken noodle soup, I use turkey lifters to remove the chicken easily.

Allow the chicken to cool and then cut it up with a knife. While the soup is cooking, you'll want to use another pot to boil your favorite pasta noodles for the soup.

I'll share the instructions on how to make this Sicilian chicken soup again below with step by step photos: 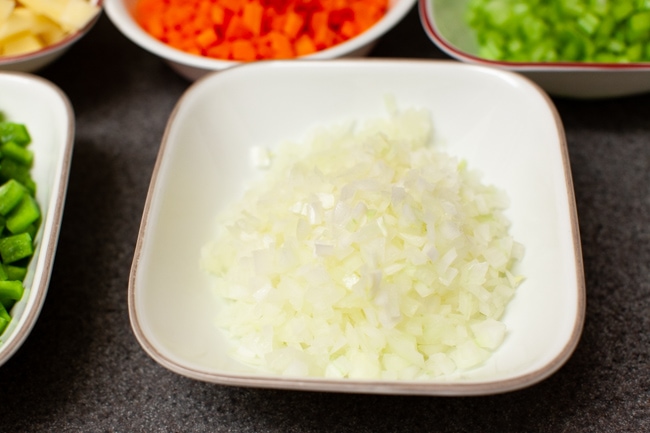 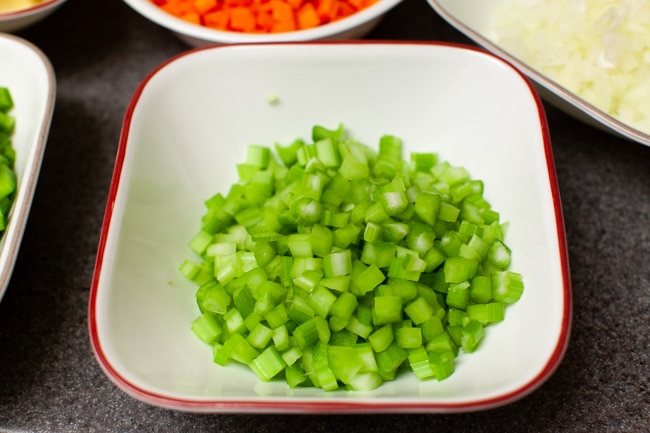 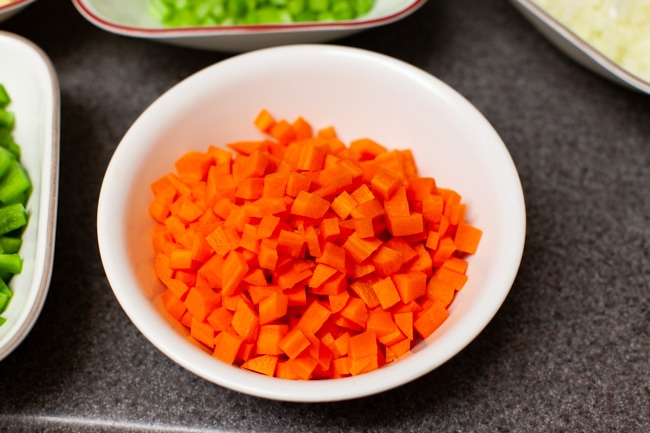 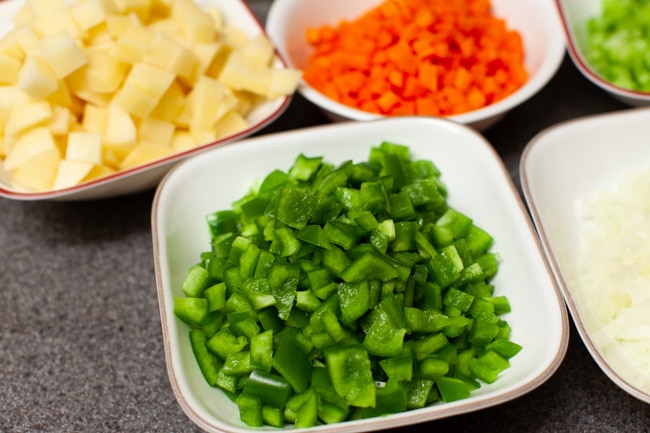 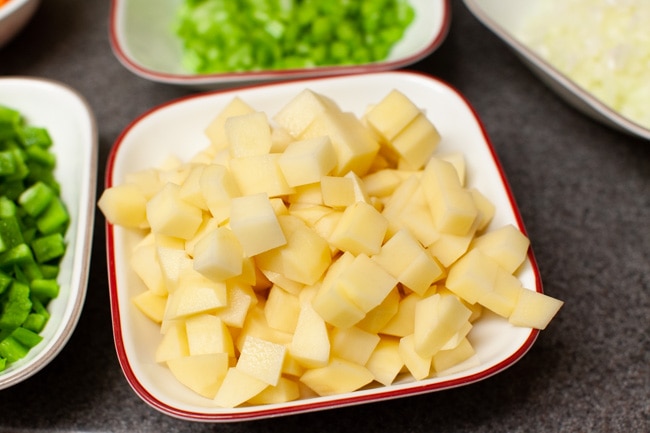 Chop the potatoes into cubes. 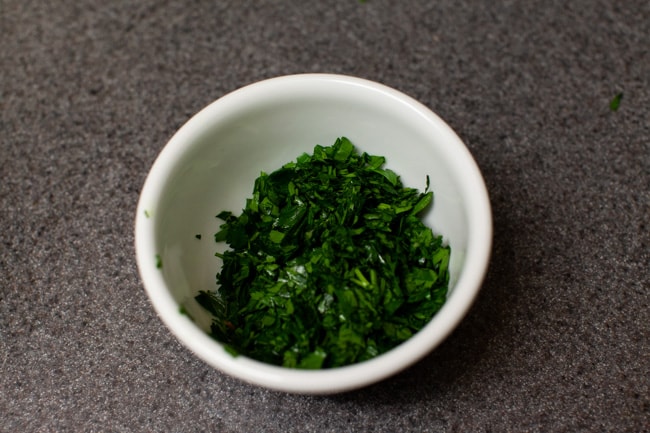 Chop the parsley and garlic. 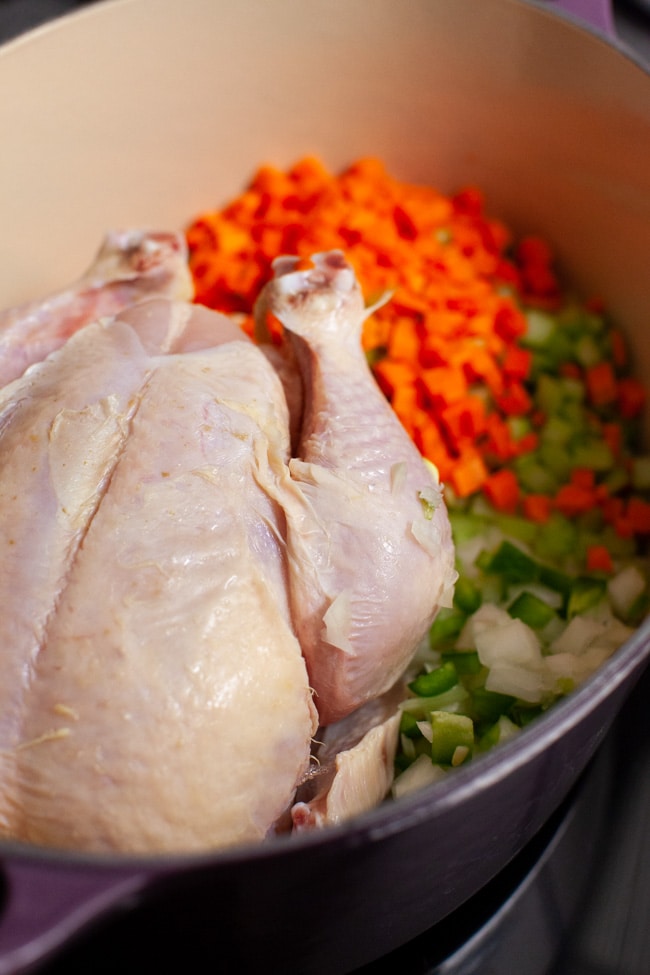 Remove the giblets from the chicken and pat dry with a clean paper towel. Place the whole chicken into a large soup pot. 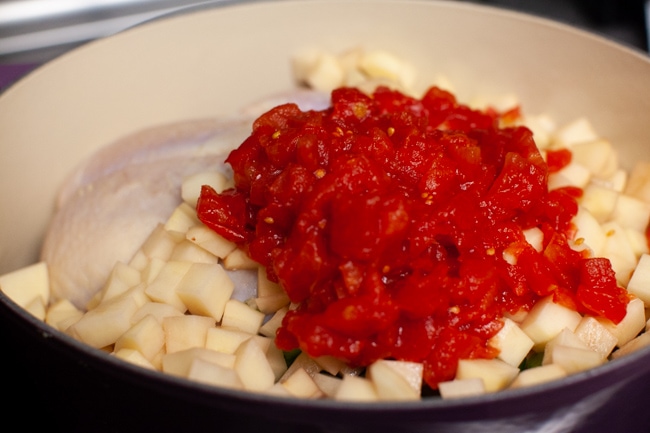 Add the canned tomatoes along with the juices. 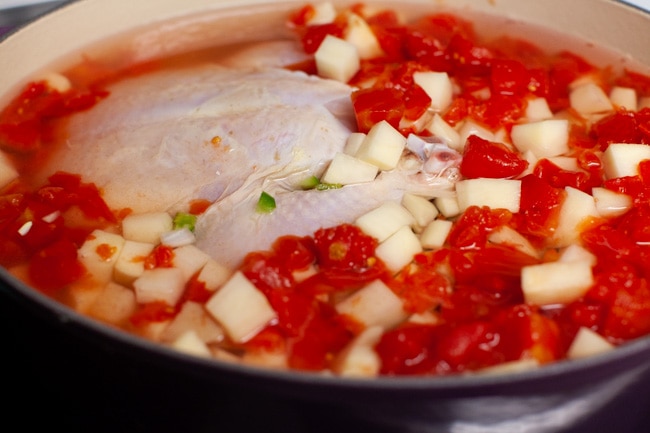 Add water to the pot (about 6 to 7 cups) to cover the chicken and vegetables.

Bring the soup pot to a boil on high. Using a spoon, skim off any foam that rises to surface (you’ll need to do this every so often while the soup is cooking). 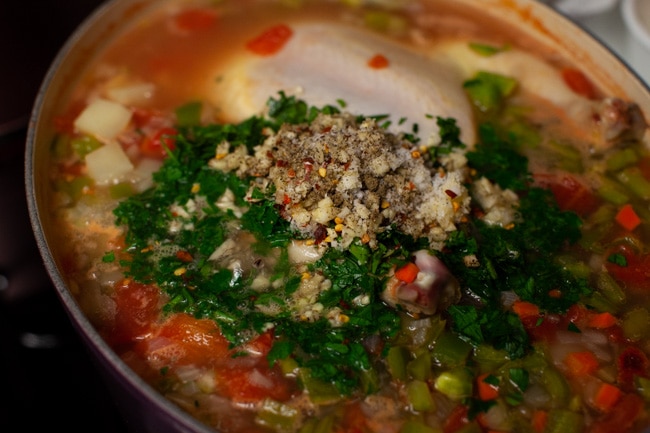 Reduce heat to medium low. Allow the soup to cook at a simmer for about 1.5 hours, partially covered with a lid, until the chicken is cooked through. (I usually flip the chicken over in the pot halfway through using big tongs.) 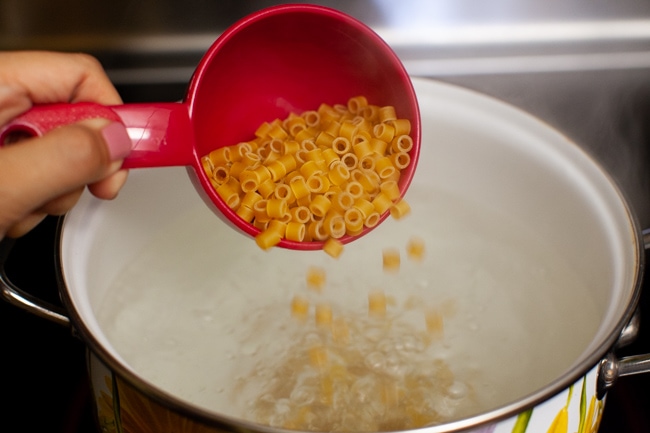 In a separate smaller pot, bring water to a boil and cook the ditalini pasta according to the package instructions.

Drain and set aside. 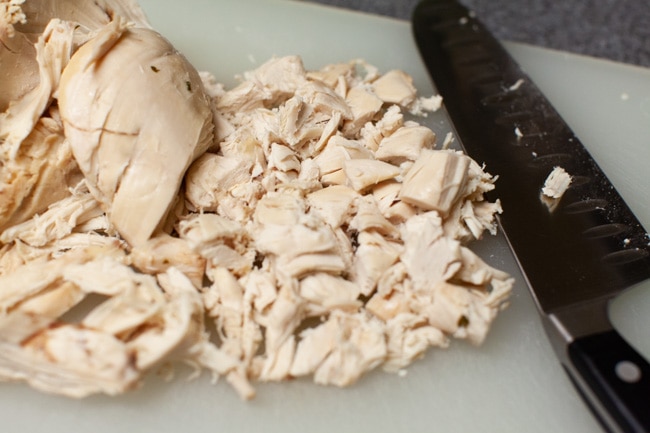 Remove chicken from the pot and place on a cutting board. Allow for it to cool for about 10 to 15 minutes. Keep the pot of soup simmering and add more water (about 2-3 cups), if you want.

Remove the skin from the chicken. Separate meat from the bones. Cut up the chicken using a knife. Set aside. 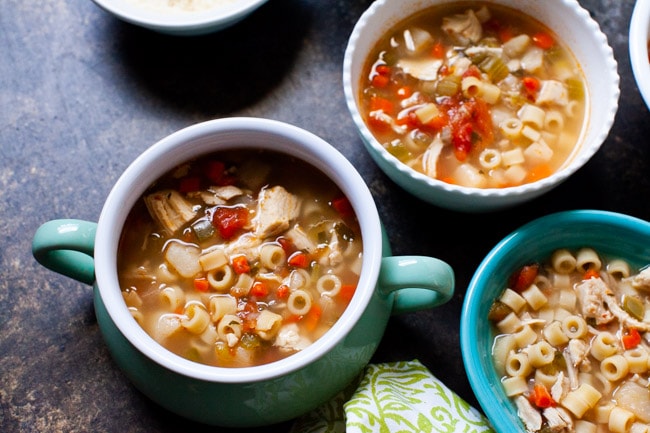 Using a potato masher, mash some potatoes in pot, this will thicken the broth slightly. Serve the soup with chicken, pasta and parmesan cheese.

I can't even say enough…how luxuriously comforting this soup is. I love the spiciness from the black pepper and the crushed red pepper. (If you have little ones, you can totally omit the crushed red pepper and use less black pepper.) The cut up chicken stays intact and the pasta al dente when I keep the chicken and the pasta separate from the soup if I'm storing the leftovers in the refrigerator.

You have to make this soup!

And I have to mention, today, Curtis eats this soup! 🙂

Now tell me, have you made chicken noodle soup before? Are you going to make this recipe for spicy chicken soup? 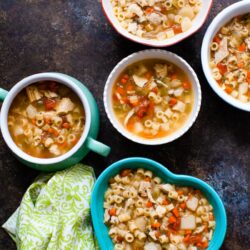 If you’re storing your leftovers in the fridge, I like to save the soup separate from the chicken and the pasta and when I go to reheat it, I add the chicken and pasta to the bowl.

If you’re storing your leftovers in the freezer, add the chicken and the pasta to the soup and then portion into containers. Label the containers with the date and the recipe name. I use the defrost function on my microwave and then heat on 100% power. (Sometimes after defrosting, I will add additional water to the soup before heating on 100%.) Add parmesan cheese and enjoy when you’re craving soup!

Slightly modified from The Orlando Sentinel 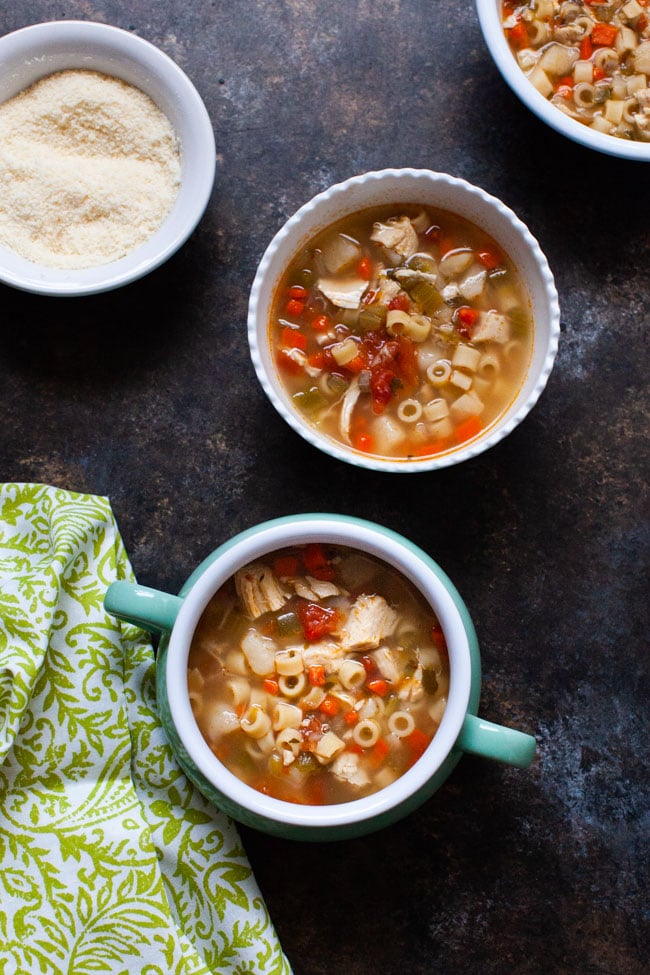 Did you snap a photo when you made this recipe? I'd love for you to share! You can upload it using the    icon when leaving a review or comment.
Subscribe
0 Comments
Inline Feedbacks
View all comments