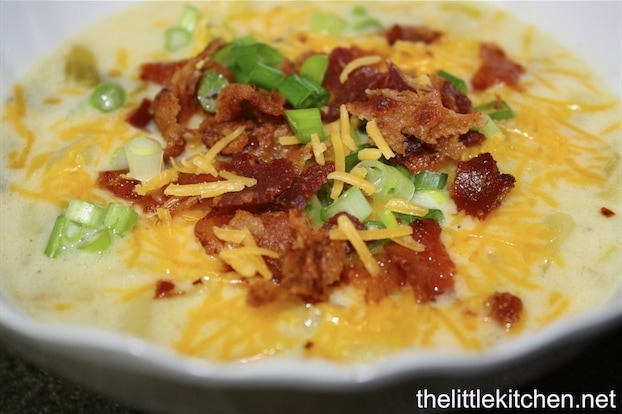 I hope you like the new design of the website, my husband designed the logo and yes, that's a blueprint (but not to scale) of my little kitchen! I have also added a facebook page so you can easily see when a new post is added. Also, use the RSS feed link to subscribe and read using your favorite RSS reader including Google reader.

With Central Florida weather being pretty chilly this week, this is the perfect comfort soup to have right now. I know everyone up north is laughing at us but with wind chills putting us in the 20s and 30s, we're not used to this!

After moving away from the Orlando area where I was able to enjoy Fiddler's Green's potato leek soup all the time, I was on a quest for a recipe. I found this one on allrecipes.com. After trying a couple of different recipes, I am pretty happy with it. I have tweaked the recipe just a little bit. It's very yummy and makes tons. It tastes even better the next day. The most time consuming part of the recipe is peeling and cutting the potatoes. 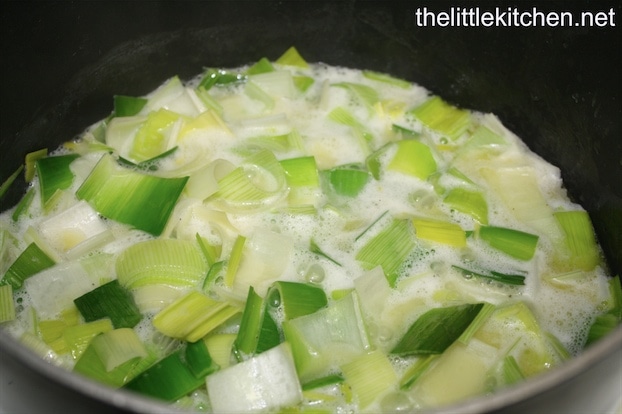 This gives you an idea of how I cut up the leeks and this is about half way through the cooking process in step 1. 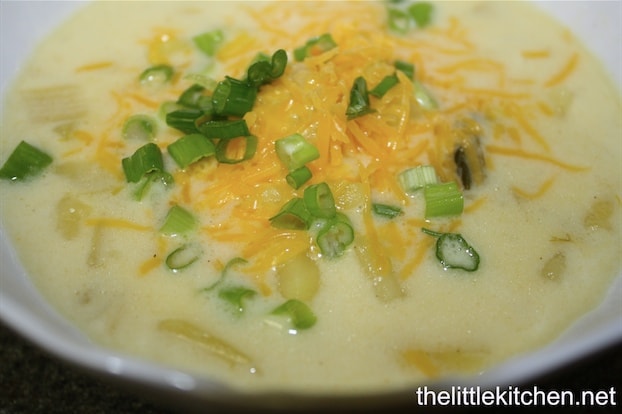 Yummy! This is how I eat my potato leek soup. No bacon for me as I do not eat pork. You'll see me cook with it though because my husband loves pork.

This bowl has all of the garnishes. 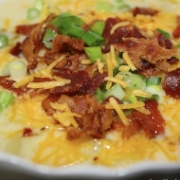 Fill a good sized bowl with cold water, drop the leeks in as you're slicing them. This will allow them to soak and the dirt will settle in the bottom of the bowl. You may have to rub the dirt off of some parts of the leeks. This is the best way to clean leeks because if you do it under running water, it takes a lot longer but also wastes a lot of water.

I slice the leeks the same way I do a green onion (only bigger) and then lay them down flat and slice in half.

I whisk the cornstarch in about 1-2 cups of chicken broth, that way you don't need to use a huge bowl for all of the chicken broth.

Temper the heavy cream so it doesn't curdle (it will still taste the same but I don't like the texture when this happens). You can use the same bowl you used to whisk the cornstarch and chicken broth. Take about 1 or 2 cups of the soup and place into the bowl. Add 1 cup of the heavy cream mix and pour back into your stockpot. Repeat.

During step 3, half way through the 30 minute simmer, I take my potato masher and lightly mash some of the potatoes at the bottom of my stock pot. This makes the soup a little thicker but be careful don't mash all of the potatoes, you want to leave chunks of potato in the soup to give it texture.

Share on Instagram and tag @TheLittleKitchn and be sure to use the hashtag #thelittlekitchenrecipes. I can't wait to see your photos!
0 0 votes
Stars
Posted on January 3, 2010
5 comments »

Did you snap a photo when you made this recipe? I'd love for you to share! You can upload it using the    icon when leaving a review or comment.
Subscribe
5 Comments
Newest
Oldest
Inline Feedbacks
View all comments
Loaded Baked Potato Soup | the little kitchen

[…] huge russets I took home with me from Idaho. Curtis insisted that I make a soup. I said how about potato leek soup (which I love) and then he said how about a baked potato […]

[…] love, love leeks especially in potato leek soup. The best way to clean leeks is to rinse them as thoroughly as possible on the outside and peel any […]

Julie, this soup looks wonderful! I have try leek and potato together, but the creaminess and topping of the soup looks delicious. Thanks.

I am such a soup girl…this looks so FANTASTIC, bring on the sweaters and cool weather…I want soup!

Love the look of this soup….you really have me excited for fall with this one girl. Of course I am sold on the bacon crumbles 😉